Guess who’s back? Back again? Lightning’s back~ With her Friends~

Lightning is definitely the person to aim for here as she’s still one of the top damage unit in global. If you’re still unable to pull a Zidane or Gilgamesh for that Dual Wield, Lightning’s innate DW ability is what makes her so valuable. Sadly, Lightning will soon drop from the top of the table as new units are introduced into the game (that’s if you manage to pull the new ones). However, Lightning will climb back up again when she receives her enhancement. Her ability to dodge physical attacks and soon magical attacks (after enhancement) makes her very strong in PVP.

As hopeless as it seems, Hope is pretty much an upgraded version of Shanttoto without that awesome TM. Hope is a support type mage with the ability to cast Esuna and Raise. You can use him to complete missions or special events which requires you to cast Water or Wind Elemental damage. Other than that, he is just useful for the FFXIII event for the bonus multiplier. If you just started the game, Hope is probably a good starter Mage for you to pick up, however, there are many better Mages out there for you guys to collect thus I do not think that he’s a good investment for long-term Mage needs. He’s TM is really bad.

Fang is definitely the “Troll” unit in this banner. I’m not saying that she’s bad as she does have decent ATK (for a 5* unit) and a wide range of defensive equipment choice. However, I think Kain is a much better choice here if you need an unit with the Jump ability for certain special events. Dragon Dive from Kain deals 210% damage compared to the the 180% from the basic Jump ability. Her TM is pretty much useless unless you got a few Elzas in your inventory.

As events get tougher and buffed by SE on Global, I believe we’re at a stage now where all of you (excluding new Players), should by now have at least 1 5* based character in your inventory. Let’s be honest, who doesn’t want to be that powerful Lightning friend instead of always relying on others. Set a target, pull within your budget and hope for the best. 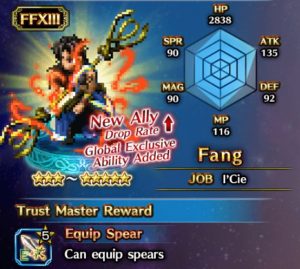 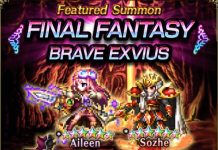